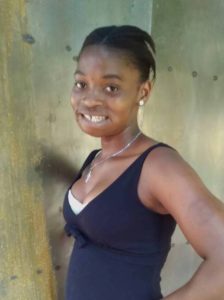 When I first saw 17 year-old Theresa Saidu in February, 2017, I was sure that she could not survive. Her entire mouth was full of her lower jaw which had expanded as if it were an inflated balloon. The tumor was large and hard, but Theresa was able to swallow creamed foods which she passed into her mouth between the tumor and her upper lip.

We first saw Aminata Kamara and Aminata Mansaray in November, 2016. They were seated together at a Catholic hospital in Sierra Leone among patients with bone fractures and bone infections who were being assessed for treatment by an orthopedic-surgical team visiting from Germany. Both women were being sent away because their facial tumors could only be treated by ear-nose and throat (ENT) and Maxilla-facial specialists, and not by orthopedic surgeons. One of them, Aminata Kamara, age 36, whose lower jaw was grossly enlarged by a tumor, had her baby daughter strapped on her back. Though her situation seemed hopeless, Aminata was still able to express hope with her eyes. 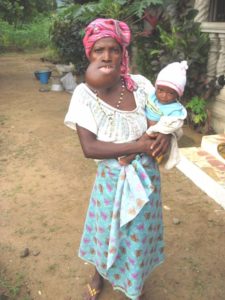 Aminata Kamara and her baby girl in November, 2016.

We had both women assessed by the only Sierra Leonean oral surgeon in Freetown and also by the only ENT surgeon. The CT scans and the biopsy results for Aminata Mansaray, age 65, indicated that her painful tumor, which was located on the right side of her face and neck, was malignant and that her case would be terminal. We are helping her with pain medications while she stays at her home. We were told that the tumor of the woman with the baby, Aminata Kamara, was benign, but could not be treated effectively in Sierra Leone.

It is said that when Momoh Kargbo was age five, he had a toothache, and then two molars detached and were expelled from his upper jaw. By the time that he was age ten, both sides of his face were becoming deformed by twin tumors that had cut off his ability to breathe through his nose and were pushing his upper teeth outward. Momoh could only sleep while sitting up In order to breathe through his mouth. He had been banned from attending school because his teachers believed him to be a form of a devil. As his tumors continued to grow, Momoh became known throughout his town in Sierra Leone as “The Tiger Boy.”

Theresa Saidu, Aminata Kamara, and Momoh Kargbo were three of the seven patients with facial or neck tumors whom ASI sent from Sierra Leone to the Kijabe hospital in Kenya on May 4, 2017 (kijabehospital.org). All seven had their tumors excised successfully and returned home to Sierra Leone on August 21, 2017. Theresa’s lower jaw was replaced with a titanium plate which her body accepted. She has been fitted with dentures by the oral surgeon in Freetown. Momoh is now back with his family. He can sleep comfortably and started back to school in September. Aminata Kamara will need to return to the hospital in Kenya for further facial reconstruction. For now she is staying at the ASI base in Freetown and has been reunited with her baby girl who at first did not recognized her mother, but now has accepted her. 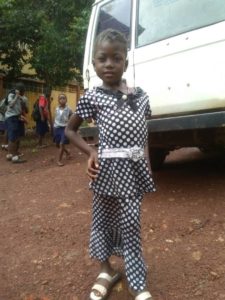 By the time that Adamsay Bangura was five-years old, her spine had been deformed by a tuberculosis infection, and her legs had become paralyzed. Adamsay’s grandmother brought her to an Africa Surgery field agent, and she was immediately placed on a six-month regimen of anti-TB medications. After a few months Adamsay began to crawl, and then to walk on her hands and feet as the medication attacked the tuberculosis where it had been putting pressure onto her spinal cord. After six months of medication, Adamsay was able to stand and to walk a short distance with her hands firmly planted on her knees for support.

On August 8, 2016, Africa Surgery sent Adamsay from Sierra Leone to Accra, Ghana. Adamsay was placed in a halo-traction device for six months at the hospital of the Foundation of Orthopedics and Complex Spine (FOCOS) (www.orthofocos.org). The device allowed her to remain in traction while sitting in a wheelchair, lying in bed, and even while walking around. At the FOCOS hospital Adamsay then had surgery to straighten her back and to stabilize her spine with implants to prevent it from collapsing any further. She then had surgery to repair her left hip which also had been damaged by the tuberculosis infection. Adamsay returned home to Sierra Leone in June, 2017. She is finally out of pain and the danger of becoming paralyzed again. She can now stand straight and walk freely, and can resume her life as a student.

Umaru Toronka, age about 56, was afflicted with polio when he was a child, leaving his right leg partially paralyzed. Although disabled, Umaru had worked his whole life as a blacksmith in a small town in Sierra Leone. He fed his wife and four children with what he was able to earn.
About four years ago, something began to cut off Umaru’s flow of urine, causing him great pain whenever he had to urinate. He sought some relief at the town’s Government Hospital. The cost of the catheters and pain treatment from the hospital quickly wiped out the family’s resources. Africa Surgery sent Umaru to the Holy Spirit Hospital, Catholic Mission (www.hsh-makeni.com) in Makeni, Sierra Leone, where ultra sound scans were done and two surgeries were performed to remove a large quantity of stones from both his gall bladder and his urinary bladder and tract. Umaru can now urinate normally and can resume his life without excruciating pain. 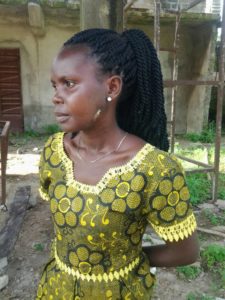 Adamsay Mansaray, age 37, had a decayed tooth removed in May, 2017, but infection had already spread to her left lower jaw where it continued to fester causing swelling and pain. The infection could have destroyed her jaw, making it difficult for Adamsay to eat. It could easily have gone septic and spread quickly throughout her body, ending her life. When she came to ASI in July, We immediately sent Adamsay to Freetown where the only qualified oral surgeon in the country medically treated her and surgically removed infected bone tissue from her jaw. By August 25, Adamsay was already back home and on her way to a full recovery.

These are only some of the many cases Africa Surgery has been assisting in Sierra Leone since I returned to the U.S.A. in March. The massive mudslide that killed at least 500 in Freetown on August 14 and the major flash-floods of August have not directly affected any ASI team members or helpers, so far as we know. We are very likely to be visited in the coming months by some of the injured victims still seeking assistance. I will return to Sierra Leone during the first week of November because on November 16 the first of four orthopedic surgical teams who will be visiting Sierra Leone from the Germany-based organization Ortopaedie-Fuer-die-Dritte-Welt ev. (O-D-W) (www.o-d-w.net) will start work. We have at least seven young persons with clubfoot to be treated by the O-D-U specialist for neglected club foot, as well as scores of patients with old bone fractures and/or chronic bone infections to start or to continue surgical treatment. I will stay in Sierra Leone managing the Africa Surgery programs until mid April, 2018. 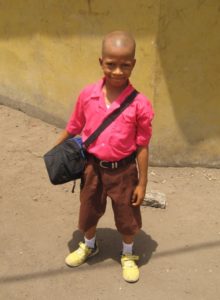 Schools opened in Sierra Leone in September. ASI still has 39 children and teens on its list of students who need to be sponsored. If you are willing and able to help a student from a poor family in Sierra Leone to attend school, a donation of $200 to ASI will allow us to provide the needed school uniforms, shoes, books and other supplies as well as to pay the school fees for your student for the current school year. When I return from my visit to Sierra Leone, I will have a photo and a correspondence for you from your student.

Thank you for your prayers and support without which our work would not be possible.