Fatmata, age 35, lives in a small farming village in Sierra Leone. Fatmata’s uterus had been bloated with fibroid growths to the point of threatening her life.

Just four days after a complete hysterectomy and two blood transfusions made possible with funds from Africa Surgery Netherlands, Fatmata was able to walk from her hospial bed to the front entrance of the hospital to share her smile with some friends and family members.

Kadiga, age 25, was taken by her husband to the Holy Spirit Hospital in Makeni, Sierra Leone. 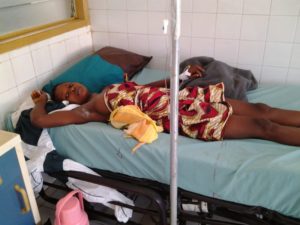 An ultrasound scan revealed that she was suffering with a ruptured enthropic gestation, that is to say, a dead fetus, and that she was severely bleeding internally. Her life was saved by an emergency surgery requiring three units of blood, all made possible with funds provided by Africa Surgery Netherlands.