On February 4, 2017, When Africa Surgery was introduced to 17-year-old Theresa Saidu, her mouth was almost entirely filled up with her lower jaw, which had been converted into a massive benign tumor. Photos were sent to the surgeon at the Kijabe Hospital in Kenya who replied that he believed he might be able to help Theresa.

On May 4, 2017, Theresa was sent from Sierra Leone to Kenya and by the end of the month her lower jaw bone had been removed and replaced with a titanium reconstructive plate. Bone grafts were taken from Theresa’s hip and placed on the titanium plate so that tissue began to grow and encase the titanium implant, a regenerative ability only possessed by the lower jaw bone in humans. The cheeks, lips and other distorted parts of Theresa’s face are slowly shrinking back to their normal size.

Theresa returned home to Sierra Leone on August 21, 2017. Africa Surgery will eventuaslly have her lower jaw fitted with dentures by the only qualified dentist/oral surgeon in the country. 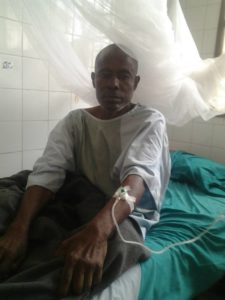 Umaru Toronka, age about 56, was afflicted with polio when he was a child, leaving his right leg partially paralyzed.  Although disabled, Umaru worked as a blacksmith his whole life in Moyumba, a small town in Sierra Leone, West Africa.  He feed his wife and four children with what he was able to earn by persistence and hard work.

About four years ago, something began to cut off Umaru’s flow of urine causing him great pain whenever he had to urinate, he sought some relief at the town’s Government Hospital.   The cost of the catheters and pain treatment from the hospital quickly wiped out Umaru’s and his family’s resources.

Africa Surgery sent Umaru to the Holy Spirit Hospital, Catholic Mission (website: www.hsh-makeni.com) in Makeni, Sierra Leone where ultra sound scans were done and surgery was performed to remove a large quantity of stones from both his gall bladder and his urinary bladder and tract.  Umaru can now urinate normally and can resume his life without excruciating pain.