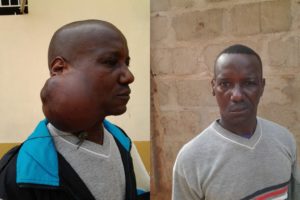 Tom Johnson, founder of Africa Surgery, Inc. (ASI), has recently returned from his latest trip to Sierra Leone and has written up a report on his work during this trip, covering October 2016 until March 2017.

On October 30, 2016, ASI sent Alusine Kargbo, age about 40, and Mateneh Marrah, age 38, from Sierra Leone to Kenya. Both had large tumors which had begun about five-years before, Alusine on the right side of his face, and Mateneh on the left side of her face and neck. Alusine’s tumor was benign. It had encased a major nerve so that its removal left Alusine with a partial paralysis of the right side of his face.  His pain is now gone, as is the threat of a slow death, if the tumor had been allowed to grow unchecked until it invaded his brain or cut off his blood flow or his ability to breathe.

Both tumors were removed by Dr. David Nolen, a young American surgeon volunteering at the Kijabe Hospital, a faith-based institution which has been helping poor patients in Africa for 102 years by offering, in their own words, “Health Care to God’s Glory”. Mateneh’s tumor proved to be malignant, requiring ASI to have her receive six-weeks of chemotherapy after surgery.  Both patients are now back at home in Sierra Leone where they can carry on with their lives without having to try to hide their faces.

Sierra Leoneans with various types of tumors, mostly of the mouth, face, and neck, continue to find us. We have been able to have some surgically treated in Sierra Leone. For others we can only have palliative care provided. Although I left Sierra Leone on March 25, the work I started there continues to go on. On May 4, 2017, the ASI team in Freetown was to send nine more tumor patients and one caregiver to Kenya for treatment at the Kijabe Hospital. But on May 3, the oldest patient, a man, age 42, passed away. We hope that the other eight, including one boy, age 11, will all have successful treatments now that they are at the Kijabe Hospital. 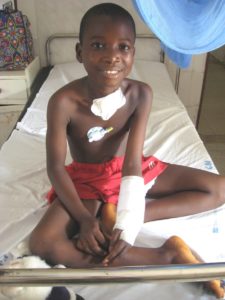 Daboh after his surgeries on his fractured
and seriously infected left arm.

On November 14, 2016, Daboh Kamara, age 12, managed his first smile in a long time, while he recovered between surgeries at the St. John of God Hospital in Lunsar, Sierra Leone. About one-year before, Daboh had fallen from a mango tree and fractured his left arm. He had been brought to an ASI field agent in October, 2016, with a piece of bone protruding from one of four orifices, all oozing puss from his badly-infected arm. Because of this condition, Daboh had not attended school for several months. Africa Surgery had Daboh surgically treated by two teams visiting Sierra Leone from the Germany-based organization Ortopaedie-Fuer-die-Dritte-Welt ev. (O-D-W). Daboh’s first surgery was to clean out the infection and remove decayed bone tissue; the next was to reconstruct his forearm. When we visited his home on January 9, 2017. he was still wearing his dirty cast. We were told that his arm was fine, and that he was scheduled to have the cast removed at the hospital in about another month, but that he was a bit impatient at having his play in a soccer game interrupted by our visit! . I look forward to seeing Daboh when I return to Sierra Leone In November, 2017. His cast must be off by now. I hope to find him able to use his left arm, and attending school again.

The two teams of O-D-W orthopedic surgeons who visited the St. John of God Hospital in November 2016, worked consecutively with the two other O-D-W teams who visited in February 2017, doing orthopedic surgery for 36 of our patients, both children and adults.   Most were suffering with fractures and bone infections caused by vehicle or motorcycle accidents, falls from mango or palm trees, or merely from cuts or boils spreading infection into bone.  Many had plates implanted to rejoin old fractures that otherwise would never heal.  One man, who fell from a tree and broke both of his upper legs four-years ago, had the left femur repaired with an implanted plate.  He will have the right femur operated on when the O-D-W teams return this November, 2017.

History was made when we had one of the O-D-W teams do the first hip replacement surgery ever attempted in Sierra Leone.  Because of the otherwise healthy condition of the patient and because her bad hip was not too extensively damaged, the operation was very successful, but because of the risk of introducing infection, O-D-W does not plan to do any more hip replacements for us in Sierra Leone at this time. 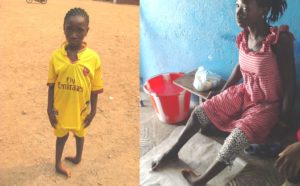 Adamsay before and after surgery to her clubfeet

Adamsay Kamara was thirteen years old when she came to us at the Holy Spirit Hospital in March, 2014.  She walked painfully on two clubfeet, and stood mortified as I photographed her in the front of the hospital.  Because we told her to return for treatment the coming November, she gave us no phone contact, only naming Magburaka, a large town in a neighboring district of Sierra Leone, as her address.  The Ebola virus epidemic then struck and made it impossible for the neglected-clubfoot specialist surgeon from O-D-W to visit Sierra Leone until after the crisis had ended.  With no phone number, we still managed to find Adamsay by showing her photo around the market of Magburaka where a few people were able to tell us in which of the surrounding villages she lived.  Dr. Fritjof Schmidt and his orthopedic team surgically corrected Adamsay’s right foot on November 15, 2016.  He plans to correct her left foot this coming November.  Dr. Schmidt corrected clubfeet for eight other ASI patients.  Six of these only needed correction of one foot. The other two, who had bi-lateral clubfoot, will have their second foot corrected this November, 2017.  We already have three more children and one young man with clubfeet for Dr. Schmidt to evaluate and hopefully treat as well.

Fatu Masou, age 70, had a tumor growing on her right wrist for about 18 months.  It was causing her pain at times, since it had started to wrap around a nerve and threatened to restrict her blood flow as it pressed against veins and an artery.  But Fatu felt greater pain because of her rejection by the members of her  community at Thunder Hill, a suburb of Sierra Leone’s capital city Freetown, who began to fear her because they thought she was a witch.  Forced to live alone in an abandoned building without doors, what Fatu missed most was contact with the local children whose parents believed that her growth concealed a “witch gun” which she could use to inflict injury and disease.

Africa Surgery brought Fatu one hundred miles inland to the Holy Spirit Catholic Hospital where Dr. Odhran Shelley, a surgeon from Ireland visiting with a reconstructive-plastic surgery team (resurgeafrica.com), was able to excise the tumor without diminishing the use of Fatu’s right hand.  Her former friends and neighbors readily accepted Fatu back into their community when she returned with her tumor removed and her wrist and hand back to normal. 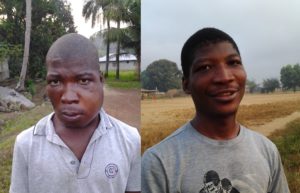 Amadu before his surgery (left) and after

When Amadu Bangura, age 27, was brought to us on December 1, 2016, the left side of his face had been severely swollen for the past week by an infected jaw, causing pain that made it impossible for him to speak.  We immediately sent Amadu to Dr. Don Davis, the Chief Dental Officer at the Connaught Government Hospital in Freetown.  Thanks to an operation and a regimen of medications, by January 12, 2017, Amadu had fully recovered to the point where he could speak clearly, and where he could not stop smiling.

Dr. Davis is the only dentist/oral surgeon in the country of about six million people who is capable of treating cases like Amadu’s, and there are many of them.  Between November, 2016, and March, 2017, while I was in-country, ASI had Dr. Davis relieve the suffering of 17 persons with abscessed jaws.  In 2015 Dr. Davis took a young secondary school graduate as an “apprentice” to get hands-on experience in this work.  Africa Surgery has raised funds from an anonymous donor to send the student to study dentistry at the Ternopil State Medical University in Ukraine.  He started attending classes there in February, 2017.   ASI hopes to be able to fund his studies for the remaining four years of formal training before he will return to Sierra Leone where he has committed to practice dentistry and oral surgery for a minimum of five years.  Africa Surgery hopes and expects that he will treat patients in Sierra Leone for the rest of his life.

In late January Prof. Oheneba Boachie-Adjei visited Sierra Leone to check on post-operative spinal deformity patients who already had spinal surgery and to evaluate candidates who might need it.  Professor Boachie is the founding director and chief surgeon at the Foundation of Orthopedic and Complex Spine (FOCOS) hospital in Accra, Ghana (www.orthofocos.org), where he is now also a professor of surgery.  In just over three days he and his team of two physicians and a nurse examined and evaluated 29 post-op patients and 55 pre-op surgical candidates.  Of these 84, Prof. Boachie identified 38 who need spinal surgery and prescribed back braces for seven patients as a means of reducing pain and preventing the further collapse of damaged or diseased vertebrae.   Africa Surgery already had braces to fit the four adult patients.  Our tailor, who is instructing students in our skills training program, designed and sewed braces to custom-fit the three children who also needed them.  Africa Surgery will soon be sending ten spine patients to the FOCOS Hospital in Accra.  Of these, two are post-op patients who, unfortunately, need revision surgery.  One is a post-op patient who broke one of his implanted rods shortly after Professor Boachie and his team left Sierra Leone.  We hope that all ten of these patients will have their pain relieved, their mobility restored, and the danger of paralysis eliminated.

After her spine fractured in June, 2016 as the result of a tuberculosis infection, Esther Sesay, age 14, lost much of the use of her legs and needs support from her mother even to walk with crutches.  She is going to Ghana for spinal surgery that will eliminate her pain, and hopefully will restore her ability to walk on her own.

The teams of ASI field agents are continuing to have decayed teeth extracted for scores of patients, cataract surgeries done and patients with other eye conditions treated, hernia and other general and gynecological surgeries performed, and skin grafts and other plastic surgery procedures done.  They are monitoring two leprosy patients for whom we had toes and parts of fingers amputated.

Rugiatu Kamara, age eight, was born with her left leg bowed out at the knee joint.  In February, 2017, ASI had surgery to straighten her leg done by visiting O-D-W orthopedic surgeons.  She will likely need a second surgery by the German team in a few years.

Thank you for your prayers and the support that enables us to continue this work.  The patients, some of whom are mentioned here, are truly grateful for your help.  Special thanks go to the George Washington Council 359 of the Knights of Columbus and to the Friendly Sons of Saint Patrick of Morris County for their support amounting to a total of $3,000 which covered the cost of my airfare and in-country personal expenses.